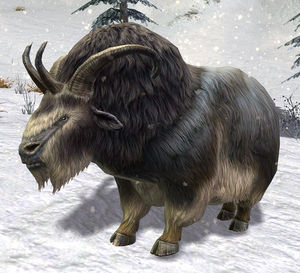 Dolyaks, sometimes called Yaks, are animals that are domesticated for hauling luggage, and are most often seen in supply caravans. Their natural habitat is the Shiverpeak Mountains, though with proper care they can survive a wide range of environments. Some dolyak herders in the Shiverpeaks use blankets to keep their dolyaks happy,[1], some even let their dolyaks inside their homes[2], and some merchants have the questionable practice of making their dolyaks eat their solid goods, such as jewellery, during transit for safekeeping.[3] Dolyaks are fruitful animals, their strength lets them carry supplies, they can be milked,[4] and after they perish they can be skinned and their meat can be eaten, be it in a stew or smoked.[5]

In the Crystal Desert is a distinctly different race of Dolyak. Less furry and more colorful, boasting a sandy brown fur with black and white stripes. They also appear more slender and with shorter, thicker horns. There is also sexual dimorphism between bulls and cows in this variant. The bulls appear in a more drap brownish color.

Wild dolyaks are known to abandon any calves that are perceived as being weak. They are also known to, upon the time of natural end of their life, instinctively wander to a graveyard site (one of them being located in Wildspine Hills) to die, similar to a real world myth about elephant graveyards.