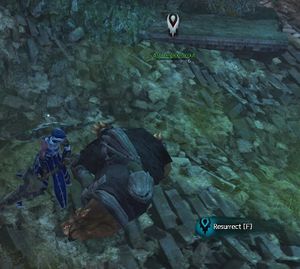 Skills with special conditions that revive[edit]

Improving the start of reviving

Improving the progress of reviving

Traits that profit from reviving[edit]

Traits that profit from being revived[edit]

Bug:
Sometimes a character's location may become desynced with its visual representation. When this happens, it may not be possible to revive that character, as using their body will attempt to start a context-sensitive Revive which will fail since the target is actually too far to start. Players can only try to move around the character continuously attempting to revive in hopes they'll start the skill close enough to the actual location of the body.
Anomaly:
The contextual revive skill appears as [Resurrect] instead [Revive] in the combat log.