Map of Kingdom of Fungus

We must enter the KINGDOM OF FUNGUS, where tales are told of a terrifying tyrant.

Kingdom of Fungus is Zone 3 of World 1 of Super Adventure Box. There are 6 Hidden Rooms, 2 Furniture shops and 63 baubles to collect.

x3; these do not count towards the Master of Baubles achievement)

You start out in a dimly-lit pit with a tree trunk, some Flytraps, and some sticky plants around you. In front of you is a shopkeeper who sells a candle that provides the Light skill (recommended for this zone). If you prefer not to pay, you can replay Dark Woods and receive the candle for free after Checkpoint 3 instead. 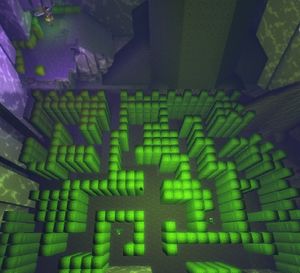 View of the Bee Dog maze

Purchase any health potions you need from the shopkeeper, then enter the tree trunk. If you have Light, you can use it to burn Sticky Plants throughout the zone to avoid being caught by them (required for the Minor in Elusion achievement). Take the mushroom to the top of the tree trunk, then cross the Flytrap to the horizontal tree trunk, being careful to avoid the pink center of the trap. Grab the two baubles on the inside of the trunk, then climb to the top and grab a third one

#1-3. Cross the Flytraps to the other side of the rift. Be wary of two Toads waiting for you on the other side—they can pull you into the sticky plants if you are not careful. To reach the Queen Bee Dog and Honeycomb, follow the Bee Dogs that spawn in this area through the maze (see picture on the left). Otherwise, head toward the checkpoint. Hop up onto the slanted tree root coming up from the ground, then jump to the checkpoint.

You can remove all of the Sticky Plants in front of the first checkpoint by jumping on to the yellow flower right in front of it and lighting them on fire. You can also jump over the plants standing if you stand high enough on the root and use a jump roll to clear the plants. On Infantile mode, you can light the plants on fire from the rainbow bridge.

Hit the Alligator so it becomes docile then use the alligator to cross to your right and defeat the Toad resting on the tree root. From there, take the mushroom in front of you up to the balcony above, defeat another Toad, and get a blue bauble

#4. Turn around and take the same mushroom up to the branch on the opposite side.

From this branch, head forward and turn right. Going forwards, you should see another branch on your right that rises above your current level and ends with a leaf supporting a red monkey and a barrel. That is your destination. Kill any monkey that gets in your way. Facing toward the stem of the leaf, there should be a steep root on your right. At the top of this is a blue bauble

#5. You must jump from this leaf to that root. This jump is tricky and may take you a few times.

Turn around now and wrap around the tree. Follow the branches to the next tree, burning plants as you go. If you already have the

key, be wary of the sticky plants. If you become entangled in a sticky plant or a fly trap while you hold a

key, you will drop it and need to recover it.

You should find a branch in front of you that goes up and ends with a blue monkey and a blue bauble. Get past the monkey and take the spoils

#6. From here, find the branch extending from the next tree. Navigate to that branch, then to the next tree. Be wary of the blue monkey and the sticky plants all along it.

Once at the tree, head to the left and jump onto the ledge along the wall. Follow the ledge forward to the Flytraps. Cross the Flytraps and up the wall to reach the

#7-8. Cross the ledges from here to the checkpoint and enter the next area. 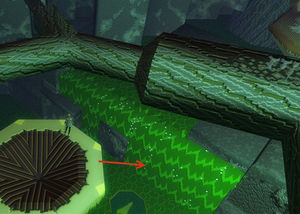 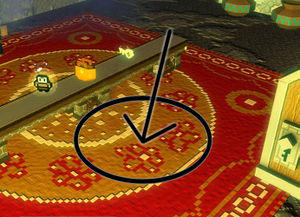 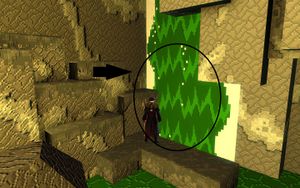 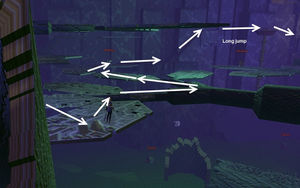 Entering this area, drop down to the clifftop below. Jump down to the lily pad below then immediately turn around and jump into the waterfall. You have now entered

From here, burn the rug with your Candle and use a Mini Bomb to blow a hole in the floor and grant you access to

Hidden Room #2 (Master of Secrets, World 1: Inside the room).

Don't leave yet however, and throw a Mini Bomb at the left waterfall against the back wall to reveal the

Furniture shop #1 (Master of Decor, World 1: Shopception). The room is filled with toxic water and contains 5 Fancy Furniture Coins. Return to Hidden Room #1, then exit to the clifftop above the waterfall.

Turn around. In the middle of the map, there should be a large, hollow, tilted tree trunk. On top of it are 3 more baubles

#10-12. From the log, jump onto the nearby leaves. Looking to the right from the log, there's a chest resting on a leaf attached to the branch you are on. Open the

Drop down onto the hollow log below you. Inside it should be 4 more baubles

#15-18. Jump out the side of it and cross the water to the nearest tree's roots. Wrap around this to the other side, where there is a branch coming up out of the water. Follow the branch up until another branch crosses in front of you. Jump onto the crossing branch and turn right to find 2 more baubles, sitting on decaying leaves

Go back to the intersection. Facing the start of the area, there should be a hollow trunk to your left. Head to it and wrap around to the mushroom to the left of it. Follow the ledges along the wall to the left to find a yellow bauble hidden in a corner

#21. Continue following the ledges along the wall to reach a shop with a green bauble in front of it

Hidden Room #3 (Master of Secrets, World 1: Overlooking the swamp). If you don't make it along the ledges from the yellow bauble, you can follow a different series of ledges from the upper checkpoint to it. 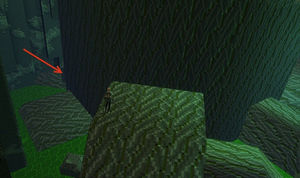 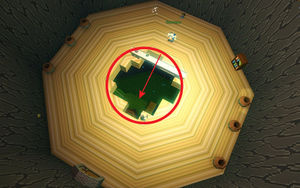 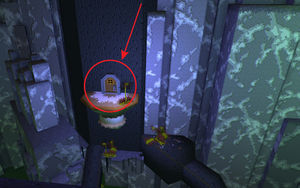 x1; these do not count towards the Bachelor of Baubles achievement)

Entering from the upper checkpoint, there are 10 baubles for you to collect scattered among the decaying leaves

#23-32. The stems of the leaves are safe, so you don't need to grab them all at once. One is slightly obscured by a leaf above it that also supports a bauble.

Note: The last two require jumping up to another set of leaves, rather than descending to the next level. It is easiest to make this jump from the stem of the lower level to the leaf of the higher level. If you cannot make this jump, you can backtrack into the previous area and take the mushroom back to the upper checkpoint to try again.

Follow the branch you are now on to its end, where there is a hollow tree stump. On the edge, you can release a mushroom launcher pod by attacking it. In the stump, there 1 yellow bauble

#34-35. Go back to the top and fall down where you released the mushroom launcher pad. Wrap all the way around the trunk to find

Hidden Room #4 (Master of Secrets, World 1: Behind a tree stump).

Do not leave the shop yet, but burn the carpet with the candle and bomb the floor of the shop to reveal a hole beneath. Carefully jump down to where a huge Alligator is waiting, and jump into its mouth to find the

Hidden Furniture shop #2 (Master of Decor, World 1: Too big to flail). Return the way you came and use the mushroom to get back on top of the tree stump.

Continue into the enormous horizontal log. Defeat the monkeys here (there are moon power ups in the barrels if you need them). Exit out the left side of the log onto the mushrooms, and continue up to the top of the log to find 5 more baubles

Jump onto the leaves that follow the log and walk on them to the large clifftop in the far corner of the room. On the clifftop, there's 1 bauble

Locked Chest #3 with 2 red baubles inside

#42-43. Turn around and drop down into the short, hollow tree stump below the cone plant closer to the log to find 1 green bauble

Exit the stump and head backwards parallel to the log. Cross the alligator and go up the tree root and down the next. At the base of the root, there are lily pads that lead into a cave guarded by an alligator. Enter the cave and cross the plants until you come to a lighted region. Jump up the tree roots to reach a mushroom launcher, and use it to bounce upwards towards other mushroom platforms. Bounce your way to the top of the up the tree, collecting 10 baubles 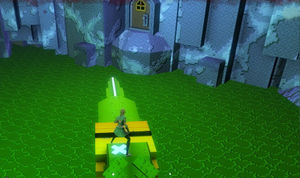 Drop down to the ledge on your right. Walk to the very edge, then jump to the mushroom platform below with a sticky plant. Inside the door is

Hidden Room #5 (Master of Secrets, World 1: Many mushroom bounces), where you can claim the elite skill, Moto's Breath.

Exit now and head to the checkpoint. Before you enter the boss battle, take a detour across the gator to your right to find

Hidden Room #6 (Master of Secrets, World 1: Right, before the king). 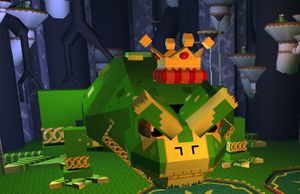 King Toad is invulnerable to normal attacks except when stunned prior to a tongue lash. To stun him, first break off Jewel Shards from the Ruby Jewel amulet around his neck by attacking it. Then, throw a jewel shard into his mouth when it opens before he attacks with tongue lash. When successful, King Toad becomes incapacitated and vulnerable to damage for around 10 seconds.

A total of 380 baubles can be dug up in Kingdom of Fungus per day.