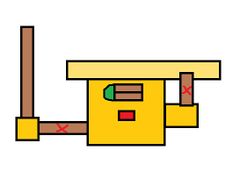 Our glorious victory has left us exuberant and rambunctious. Let us destroy that CART!

Cart is the bonus zone of world 1 of Super Adventure Box.

This zone is simple: do as much damage to the cart as possible before the time runs out. When the time expires, an old man will come out of the hut and say, "Aw, man. My cart! I only had 6 more payments on it".