This article is about the Super Adventure Box NPC. For an alternate name for in-game merchants, see Merchant.

At last, a customer! I'm eager for your business. — Shopkeeper 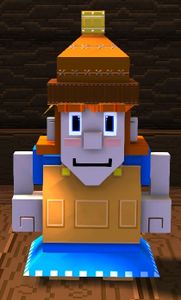 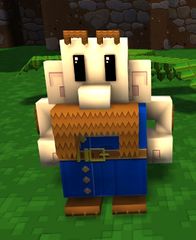 At last, a customer! I'm eager for your business.

Shopkeepers are allied vendors found inside Super Adventure Box. Most are located within shops, behind a counter that allows you to trade baubles for certain items and upgrades.

1. Can only be purchased once.

(Chat box translations do not always correspond exactly to the SAB dialogue boxes, which sometimes cut off early.)

When talking to or entering shop
Shopkeeper: Now that you're here, maybe you'll buy some of my stuff.
Or
Shopkeeper: At last, a customer! I'm eager for your business.

Outside their shop in Dark Woods
Shopkeeper: This water tastes improper. (dies)

In the toxic water after it has been drained in Dark Woods
I lost my HAT in the water. Do you have a backup HAT?

Here, I have an extra hat.

Thank you! I do not need this CROWN now. You can have it.

I do not have hats to spare.

After giving the shopkeeper a HAT in Dark Woods
Thank you. I searched for my HAT for a long time.

The water is not safe. You should stay out of it.

After destroying Cage at the end of Zone 1 or Zone 2
Thank you for saving me. Here, I'll show you the way to a new place.