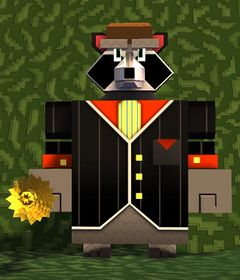 The Raccoon Kingpin is a mini-boss found in World 2 of Super Adventure Box. Much like the Queen Bee Dog from World 1, the Raccoon Kingpin guards an object filled with baubles, in this case a Stump. To find him, find two Hillbillies next to a distillery, and follow the raccoons after they have appeared and raided the distillery to navigate through the maze to where he is.

The hillbillies and distillery are located just after the checkpoint where directly behind the waterfall and before the Frogger-like section. It's best to follow the raccoons precisely as otherwise you are likely to run into a bear who will follow you to the Raccoon Kingpin.

He is located a short bit after the second Octopus near the gong pagoda. Continue on after clearing the checkpoint with the second octopus to the next two checkpoints, and upon reaching the second checkpoint, the one in front of the huge pagoda, do not enter the building. Instead, carefully climb all the way to the top using the trees on the left side of the building to scale to the higher sections, and then using the clouds on the opposite side of the building to reach the roof, and jump to the grassy area nearby. Use the spinning flower to be thrown to the area with the hillbillies and then follow the raccoons to the Raccoon Kingpin.

If you have used the Shortcut Eagle, but have not yet triggered a gate after your arrival, you can jump to your death and reappear at the checkpoint before the start of the portal maze (with three assassins coming up behind you). Turn around around and go back along the two wooden paths to the gong temple then continue as above.

Located near the starting section of the zone, instead of heading up the ramp to the first checkpoint, take a right. Be careful as the area from here to the Raccoon Kingpin is ice and therfore slippery.