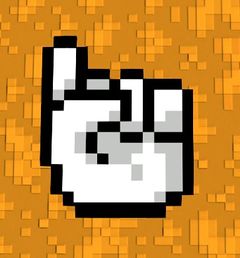 Helping Hands are indicators found in Super Adventure Box that direct which way players should go and the difficulty level of that direction. They are plentiful in Infantile Mode; less common in Normal Mode; and in Tribulation mode, the few that remain become lethal Hand Missiles that fire at players who approach them, killing them instantly if they hit.