I notice that sometimes, Continue Coins can be looted from the chest.

Daily rewards between Normal and Tribulation mode are separate, regardless of how many levels a player does. And Infantile Mode has no daily. Konig 13:50, 5 April 2016 (UTC)

I'm not sure the proper order for the lower sections: Notes, Releases, Trivia, Gallery, External links, See also, References. Couldn't find our general layout formatting manual of style that covers all these sections (like Wikipedia's w:MOS:ORDER). Trivia section is quite large due to Tributes. --BryghtShadow (talk) 06:04, 7 April 2016 (UTC)

To expand on the trivia, the books open on the table has the Super Adventure Box credits in New Krytan under the open (bent) pages. Can screenshot this to read with zooming in and out of first person camera while carrying the table with the book and getting lucky on the print screen if someone wants to attempt to confirm my translation.

The team that brought it to you was: 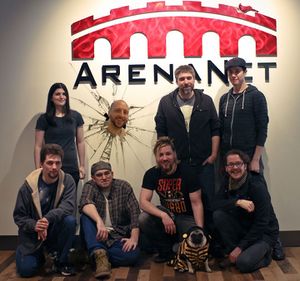 The Super Adventure Box team, from left to right:

Daniel White is our programming magician. He gave us the power to swap out the UI, upgraded the missile code and combat system to get us that old school combat mechanic feel, and got our physics to work with wacky things like bounce mushrooms.

Lisa Davis is the one who brought everything together and made it go. She scripted all the creatures, skills, secrets, and figured out how to make it all work in one coherent whole. A truly magnificent feat!

Jeff Weber was our primary prop and creature artist. He built most of the walls, rocks, clouds, critters, and pretty much everything you see in SAB.

James Smith is our producer extraordinaire who somehow managed to heard all us cats in the same direction. Apparently we wore him out so he couldn’t make it for the picture. Photoshop to the rescue!

Josh Foreman built the maps and coordinated the project.

Trevor Howell brought all our boxy creatures to life with style. He also had to learn to breakdance before animating the spiders.

Jason Wiggin built the Super Adventure Box that sits in Rata Sum, made our weapon skins and the in-game items like the candle, bomb, pointy stick, etc., and the beautiful dancing flowers.

Byron Miller is our principal QA guy (or Secretsfindah) but most importantly, came up with the idea of the bee dog.

The Super Adventure Box now appears on the loading screen for Rata Sum! I assume this is only for the duration of the festival, but I'd like to see it added... somewhere. Not sure if it should go here or Rata Sum. --Idris (talk) 18:06, 29 March 2018 (UTC)

I did a stupid. Last night I renamed the four powerup articles from <one-word description of their effect> (Super Adventure Box) to <shape> power-up. At the time, I was working under the assumption that the game never referred to them by name, so I figured it would be more helpful to rename them to something intuitive. But now I realise that the game names them in the Study Aids achievement, and the original wiki titles were correct all along. -__- I'd like some input on what I should do now: revert the names back so they reflect how the game calls them, or keep the current, more intuitive names?

My reason for asking is that when people search for the names they're going to be directed to Damage Boost, Invisibility, Invincibility, and Speed Boost, which are all unrelated articles anyway. (Though Invincibility is a redirect to Invulnerability, in fairness.) --Idris (talk) 15:45, 31 March 2018 (UTC)

I've decided to revert the names. The wiki should reflect the game. I will be keeping the intuitive names as redirects though. --Idris (talk) 21:05, 2 April 2018 (UTC)

Glorious chests no longer drop separate blue weapon skins, they instead drop the box where you can choose one. For the drop rates, I opened 1320 glorious chests, all in normal mode, and got 25 blue chests and 5 kaiser chests. Feel like I got lucky with the kaiser ones though. Could be that the blue wep chest chance is 2% and Kaiser is like 0.2-0.4% or something or that the chance for a box is around 2-2.5% and some low percent of it, 10-20, prolly on the low end of that range, is chance for Kaiser and rest is Blue. My sample size is kinda small though. --Sutgon (talk) 11:44, 19 April 2018 (UTC)

i have to write samewhere about thing that happened to me in sab last time it was up. I was afrait to write it somewere because it thing it rule breaking and get me ban or something. In the wurm shortcut i hit acidentaly the celling in some weard way and get from map droping into water below. I could swim in the water and use some of the sab skills (2 and 3 if i remeber corectlly) and see things above me (like the king frog hiding under the swamp from it jump up), there were restriction of how deep i could swim and how far to sides but it was wierd. luckily it never happened again but it can mean there will be sab under water or pool swiming since the sab transformation afectet it. And if some people know it can happen it could lead to A dev fix it B some use it to see if there are other unused zone and things —The preceding unsigned comment was added by Naryk (talk) at 20:47, 29 December 2018 (UTC).

Alright I have done some research on it and judging by the animation and way of entering, I believe the user was likely correct in stating that it was inspired by reference to Secret of Mana: Video. While Mario also has some cases of cannon travel, they usually launch Mario stretched out and have way sleeker designs, instead of the robust cannons of sab and SoM --Doctor Refrence (talk) 00:49, 7 April 2019 (UTC)

Which skins (including infusions, etc) are hidden in SAB, and to what extent?[edit]

I know weapons and back pieces are hidden.
Aurora's "4 orbs" effects are hidden, but not the purple glow emanating from the character.
Do we have a comprehensive list of how entering SAB affects the visual look of our character's equipment and other pieces of gear? --1.32.66.6 23:16, 2 April 2019 (UTC)

The mainspace of the wiki should represent the current state of the game. That said, my user page is full of SAB related stuff. —Kvothe (talk) 00:09, 14 July 2019 (UTC)