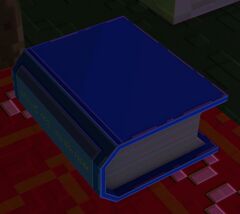 SUPER ADVENTURE BOX: THE OFFICIAL NOVEL is a book written by Bonnie Kunderah that can be found within the secret area beneath the Hub in the Super Adventure Box.

"My army of snakes and monkeys is relentless, Storm Wizard." Lord Vanquish sneered, patrolling the line of yeti hostages. "Already King Toad has declared fealty. The Assassins of the Pain Cliffs will follow. Do not make this more onerous than it need be."

Shakily, Storm Wizard rose, a trickle of blood running down his long beard. With the last of his defiance, his eyes met that emotionless, crimson visor. "You're a tyrant," he rasped, "and this mountain will never belong to you."

A yeti head rolled across the ground, coming to a rest at the Wizard's feet. Its dead eyes stared up at him, as if asking: Why?

"I will not ask again." Vanquish said, their voice as cold as their eyes. "Bend the knee, Wizard, or perish like the knaves of the Sunny Glade."

There had never been a chance.