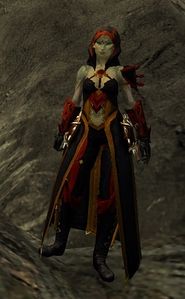 Agent Lylym is the scout for the The Mire Sea area in Mount Maelstrom. She can be found west of Magmatic Waypoint.

Pact forces are gathering to the northeast at Oxbow Isle in preparation for battle with the Inquest and their infernal machinations. However, the krait and the minions of Zhaitan have been disrupting the supply routes. They must be dealt with before any assault can take place. If you are willing to help, seek out Magister Kimberly on the isle.

Good job at Oxbow Isle! I've received word that the krait there are thoroughly boggled.

It was no problem.