From Guild Wars 2 Wiki
Jump to navigationJump to search
Stub. Key elements of this npc article are incomplete. You can help the Guild Wars 2 Wiki by expanding it.
Reason: Missing full body screenshot and fleshed out biography.
Spoiler alert: The following text contains spoilers relating to Guild Wars 2. 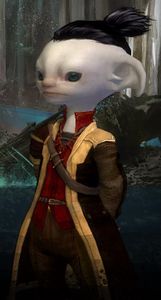 We're asura, and we always strive for professionalism. Today will be no different.

Agent Zott is an asuran optics specialist in the Order of Whispers. He participated in the retaking of Claw Island where the Pact Commander helped him redirect the energy of a lighthouse. Zott and his new partner Elli later helped assault Orr from a naval point. The two developed feelings towards each other, shown by Zott's attempts to comfort Elli when she recognized Risen Captain Yejj as an asura she had once known. Zott helped the Pact take the Orrian shore, only for the Risen Marksman Rukbat Rami to fatally shoot him in the back with an arrow. Zott's death motivated Elli to keep on fighting for the Pact to bring down the Elder Dragon Zhaitan once and for all.