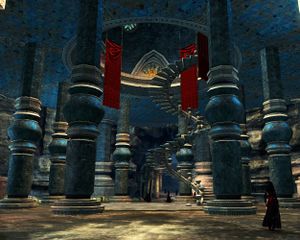 The Chantry of Shadows.

Shadows plays all sides off each other to keep the status quo churning and exploitable. They advance Joko's cause one day, Sunspears' the next. A very dangerous game.

The Order of Shadows is a splinter faction of the Order of Whispers. They are stationed primarily within the Desolation, with agents working throughout the Crystal Desert and within Vabbi and Istan. The Order of Shadows divides itself into four practices: preventing the situation of Elona's politics from getting out of hand, monitoring the Mouth of Torment,[1] preserving the knowledge and history of Elona and Vabbi,[2] and assisting Elonians with external threats like the Forged and ley line-crazed creatures.

The Order of Shadows primarily focused on Palawa Joko's rule over Elona, but also watched over the Mouth of Torment due to their location. Their main headquarters became the Chantry of Shadows, located in the Desolation overlooking the Mouth of Torment. Despite their open claims of working against Palawa Joko, however, the Order of Shadows did not proactively work to dispel Palawa Joko's reign. They worked from the shadows to keep a status quo in Elona, preventing Joko from becoming too strong, but similarly sacrificing innocents and hindering the remnant Order of the Sunspears to prevent instability and to protect their own ability to influence events.[3] For centuries, the Order of Shadows was more interested in being capable of subtly influencing events than it was about freeing Elonians from the undead king's rule.

Section-stub. This key section of the article is incomplete. You can help the Guild Wars 2 Wiki by expanding it.
Reason: Expand lore with the events from Path of Fire and Season 4.

Due to their shared origins with the Order of Whispers, many Order of Shadows ranks are either the same, or parallel, Whispers' ranking: