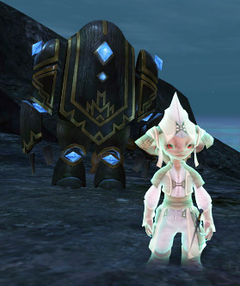 A genius and his time are soon parted.

Stumm is an asuran tradesman and Order of Whispers Creator, an inventor of gadgets to assist agents in field work. In typical asura fashion, he is arrogant and narcissistic. It is also claimed that he's a bit of an eccentric, being involved in some unusual schemes.

Stumm is never actually seen in-game, but he is interacted with indirectly during the events of which he is a part. In one instance an order is placed by messenger crow and delivered via teleporter. In another, he sends a messenger golem that projects a hologram in his likeness.

In Lornar's Pass, Stumm makes shipments via caravan, however the shipments are frequently attacked by grawl, who steal the shipments and worship the contents. Shipping Logs left behind in the attacks reveal that one of Stumm's frequent patrons is Ogden Stonehealer of the Durmand Priory, to whom Stumm attempted to send a shipment of flowers as a gift of thanks.

He is a financial backer of Researcher Bramm and Venpa in their research into ettins as a potential source of cheap labor. He provides Venpa with one of his Stumm Brand Power Suits to facilitate her construction of an ettin-proof suit. He also arranges for a shipment of artifical Wind Riders to be sent to Researcher Suki as part of a plan to teach fear to norn youth.

In Malchor's Leap, in his duty as Whispers Creator, he assists the Whispers Agents stationed on Murmur Isle, in Whisper Bay, with their assault on the Omicron Test Facility. He decrypts codes acquired by one of the agents and sends his messenger golem, programmed with the necessary codes to shut down the facility's energy tower.