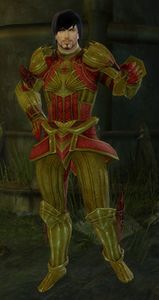 Upon questioning, Velazquez claims to be from Kryta, but displays a lack of knowledge about the kingdom. He does not look Elonian either and is evasive when subjected to further questioning about where he is from. He also lets slip that his career as a field agent ended when his wife was killed in the line of duty.

To members of the Order
What's the status of your assignment, agent? Speak quickly.

What is it that you do here, Preceptor?

Halvora handles combat missions, Valenze does research and analysis. My job, quite simply, is spycraft.

It's underway, progressing well sir. I'll get back to it.

After completing Retribution
Hm. You know, <Character name>, your step could be lighter.

Noted. How are things here, Perceptor?

Good to hear that, sir.

I'll take that into consideration, sir.

If your character is not a member of the Order of Whispers (requires a party member with a portal skill)
Busy now. Shoo.