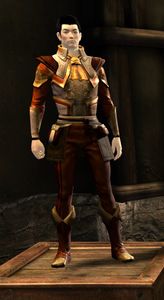 Heralds were NPCs that were added to each of the major cities with the Flame and Frost: Prelude release. These NPCs provide information on the latest occurrences in the Living World of Tyria, and direct players where to go in order to experience any new content.

Upon logging in for the first time after the introduction of heralds, players receive a unique mail that varies depending on their race, informing them of the heralds' appearance and purpose.

There are two heralds in each of the major capital cities (The Black Citadel, Divinity's Reach, Hoelbrak, Rata Sum, The Grove, and Lion's Arch), located next to the main entrance as well as the asura portal to Lion's Arch (or, in the case of Lion's Arch, on the bridge to the gate hub leading to the other cities).

Divinity's Reach herald after viewing the opening ceremony on any character
Enjoying the festivities? The Crown Pavilion has turned out to be an exciting new diversion.

I think I'll let my bruises heal before I visit the pavilion again. What else is there to do?

You could assist Her Majesty's hot air balloon pilots, or help light torches around the Beacons of Kryta.

Tell me about the Beacons of Kryta.

Visit beacons throughout the countryside to retrieve the Flame of Kryta and light nearby ceremonial torches in Her Majesty's honor. The nearest beacon is at the Crown Pavilion.

What else can I do?

Tell me about the hot air balloons.

The queen has provided free hot air balloon transportation to the celebration from all over Tyria. I'm sure her pilots would welcome your help protecting their passengers.

What else can I do?

All other heralds after viewing the opening ceremony
So you've been to Queen Jennah's new Crown Pavilion? I'll bet that's something to see.

During Bazaar of the Four Winds[edit]

All heralds
The fabled Bazaar of the Four Winds has spontaneously formed in the Labyrinthine Cliffs! You must see it!

How do I get there?

Captain Magus the Bloody Handed[sic] is said to have the details. You'll find him in Fort Marriner's Main Haven Headquarters. Good luck!

I'll think about it.

All heralds
It's Kiel versus Gnashblade! Whoever has the most supporters wins the Zephyr Sanctum trade contract and secures the open Ship's Council seat, so support your favorite!

I see. How can I support the candidates?

Speak to Kiel, Gnashblade, and Sailor Devin in the Labyrinthine Cliffs bazaar. They'll each provide you with opportunities to earn support for your candidate of choice.

How will this affect Lion's Arch?

Kiel's declared that she's going to lower Tyria's Waypoint costs for four weeks, and research mysterious past events and alliances. She'll also begin a weekly rotation of our favorite activities!