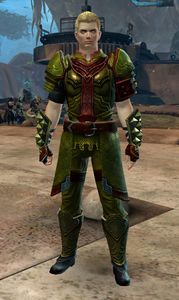 Benn Tenstrikes is a mercenary and member of the Order of Whispers. His parents are Captains Fel Vaerdenmer and Merri Sunbower, and has a sister in Divinity's Reach who is a priestess of Balthazar. His surname, "Tenstrikes," is not his proper surname but a self-given name out of his pride of being able to fell an enemy in ten strikes or less.

When Demmi Beetlestone ran away from her father, Benn was assigned the task of escorting her as her bodyguard to the Chantry of Secrets, but was ambushed by the Ministry Guard, which gave the Jackdaw Pirates the chance to kidnap Demmi. After Demmi was successfully brought to the Chantry, the Ministry Guard attacked and captured Benn again, and Caudecus' mercenaries held him captive in Beetletun to interrogate him for Demmi's location. He was freed by the Order of Whispers, and depending on the player's choices in the personal story could have brought his mercenary forces to the battle to retake Claw Island.

He isn't seen again until after the battle with Zhaitan, where he can be found attempting to woo Crusader Eilye Jeyne. They were both part of the Pact Fleet's assault on Mordremoth, but went MIA after the fleet was brought down.