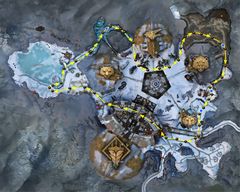 Time Trial: Dragon Bash Rally is an adventure in Hoelbrak in which players need to race through all the checkpoints as quickly as possible.

Talk to the Time Trial NPC right next to the

The objective is to guide your mount through the rings in sequence. There are small blue orbs at specific points throughout the track that will instantly replenish the mount's Endurance. The adventure ends at the final ring and you will be guided between each ring with a self-correcting glowing trail. Players who do not own a mount can rent one by talking to either Roller Beetle Rental or Raptor Rental NPCs near the adventure.

You can practice the course while the race is being set up. Ready to set a new lap record?