I pity these things. War is all they know; a nightmare from which they will never wake. 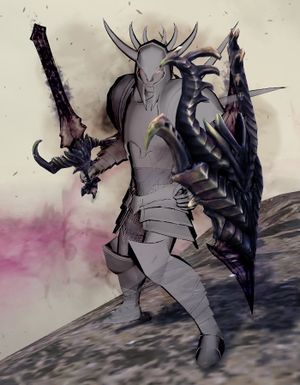 The Shadow Army are the forces of Menzies, Lord of Destruction and Balthazar's half-brother. Their exact nature is unclear as some believe them to be living shadows, others claim they are souls of the dead who are cursed to fight in the Eternal Battle, and still others call them magical constructs created out of nightmares.[1]

The Shadow Army was cursed centuries ago so that they would forever despise and hate the god Balthazar and his Eternals, forced to roam the Fissure of Woe and serve Balthazar's half-brother Menzies in the Eternal Battle.[1] When the fallen god Abaddon attempted to break free from his prison and caused Nightfall, Menzies lent some of his Shadow Army to Abaddon's cause, stationing them in the Ravenheart Gloom on the edge of the Realm of Torment.[2]

As part of his pact with Abaddon and Dhuum, Menzies sent three of his Darknesses from the Shadow Army to lead a force of Dhuum's followers and Abaddon's demons in an attack on the Hall of Heroes through the portal from the Tomb of the Primeval Kings in 1072 AE.[3][4][5]

The Shadow Army was able to take over the Temple of War, located in the heart of the Fissure of Woe, when Menzies successfully swayed Lord Khobay to betray the Eternals. Despite this initial success, the Shadow Army lost their hold when a group of mortals assisted the Eternals in retaking the temple and hunting down Khobay's unit of treacherous temple guards. At an unknown point in time following Abaddon's demise and Kormir's ascension, the status of the Eternal Battle shifted to seemingly make the Shadow Army less of a threat.[6]

Even after Balthazar had been stripped of his divinity and he had turned many of his Eternals into the Forged to focus on battling the Elder Dragons instead, the Shadow Army continued to roam the Fissure of Woe seeking their enemy. Some Inquisitive Djinn speculated that Balthazar's ousting may have allowed Menzies to take control of the Fissure of Woe.

When the Elder Dragon Kralkatorrik was forced out of the Mists by the dragon Aurene and the Pact Commander in 1332 AE, several members of the Shadow Army were brought into Tyria along with the Burning Forest that formed part of the newly formed Dragonfall islands. Because Balthazar's magic had been consumed by Aurene and Kralkatorrik in the Battle of Kodash Bazaar, the Shadow Army's curse directed their attention and ire towards the rival dragons' respective clashing forces—the Branded and the Order of the Crystal Bloom.[1]