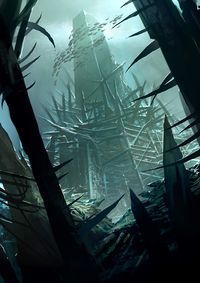 An obelisk, surrounded by krait structuring.

Krait Obelisks are massive slabs of stone that can only, and rarely, be found on the Unending Ocean's floor. They are made out of a unique and smooth dark stone with no symbols on them, and are of unknown origins. They are the focus of krait religion on Tyria, as the krait believe these obelisks mark the places where their nameless, abyssal prophets have ascended into a mystic world. However, land-dwelling scholars theorize that the obelisks are ancient monuments to important krait figures of the past, rather than being mystical in nature.

Krait are known to once have built their pillared cities around these obelisks, worshiping at these monoliths, until they were driven out of their homes roughly fifty years ago.