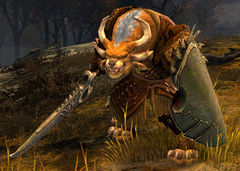 Help the Sleekfur Warband defend the road at Soldier Mesa (56)

Clean up the Flame Legion magic (61)

Escort Sentinel Scalebrusher and his devourers to the pen (56)

Stop the Flame Legion ritualists before they summon an effigy (56)

Take Severed Breach back from the Flame Legion (61)

Protect the engineers while they lay siege to Vidius Castrum (62)

Defend Balint and his device from hostile attacks (64)

Defend the giant devourer and destroy the Flame Legion defenses (65)

Destroy the flame legion portal and drive out invaders (16, 24)

Drive out the invaders, and destroy their personnel carrier (16, 24)

Recapture the homestead from invaders (14)

Recapture the ranch from invaders (17)

Bug:
Flame Legion Blademasters appear to have a bugged collision hitbox when using the skill Shield Bash. Even if they're close enough to stun an enemy, Blademasters will often slide in place for a few seconds before they actually execute the stun. Aside from this, they can also easily get stuck on impassable objects or terrain due to the skill's leap mechanic. Flame Legion Bladestorms suffer from a similar problem.