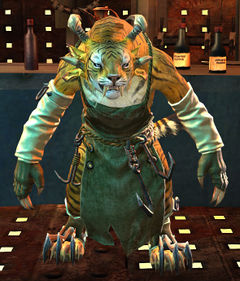 The Charr Bartender is merchant found in the Village of Smokestead selling alcoholic beverages that gives a buff that lasts ten minutes.

Prevent a brawl between the three legions (4)

Section-stub. This key section of the article is incomplete. You can help the Guild Wars 2 Wiki by expanding it.
Reason: Possible dialogue differences depending on Legion, needs confirmation

If charr
Welcome to the Tavern on the Grey, where charr gather to booze, boast and black out.

So, barkeep, which legion makes the best patrons?

Is it the Ash Legion?

(if character is Ash Legion)
Well, you Ash Legion guys are quiet. Sometimes I even forget you're here. No surprise, since Ash specializes in surveillance and spying. But sometimes, you Ash slip out without paying their tab.

It can't be the Iron Legion!

Iron Legion guys are handy whenever I need anything fixed. Forging all the legions' weapons, they're good with tools. Of course, at the end of their shift, those Iron soldiers can get a little rank.

I can't believe it's the Blood Legion.

Blood Legion are always first at the door when I open each day. Guess being aggressive comes in handy, being the ones on the front line. Of course, Blood will also bar brawl just to pass the time.

Then which legion makes the best customers?

I told you, I don't like to play favorites.

Thanks for the conversation.

Tell me it's not the Blood Legion. (similar to asking about Iron Legion first as above, except the order is different)

Well, if it's not my Ash Legion, I don't want to know.

Is it the Iron Legion? (similar to the above, except in a different order)

Is it the Blood Legion? (similar to the above, except in a different order)

Other races
Welcome to the Tavern on the Grey, where charr gather to booze, boast and black out.

Can I ask you something?

What do you want to know?

Tell me about the Iron Legion.

The Iron Legion are the guys who work day in and day out at the forge. They're responsible for making all the weapons and war machines used by the legion armies. Their motto is: "Steel won't yield."

Thanks for the information.

Tell me about the Blood Legion.

The Blood Legion are the front line guys. They're the soldiers who lead the charge into battle and go head-to-head with the enemy. Their motto is: "Overpower."

I appreciate your help.

Tell me about the Ash Legion.

The Ash Legion are the information guys. They specialize in surveillance operations and spying. Their motto is: "Quick and quiet."

Thanks for your help.

Tell me about the Flame Legion.

(snarls) Those traitorous zealots tried to lead the charr to dominance by any means necessary. Now, their goal is to destroy the other three legions and force them into subservience.

I appreciate your time.

Forget it. I changed my mind.
(if player assisted with Prevent a brawl between the three legions)

What was with that fight?

You know how it is. Sometimes things get heated. Thanks for calming them down before I had to step in.

It happens. So, which legion make [sic] the best customers?

Do you have any of that booze?

During Prevent a brawl between the three legions
Oh, no, I recognize that sound. Another drunken brawl's about to break out. Why didn't I listen to my mom and become a moa farmer?

I'll go calm them down.