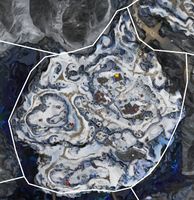 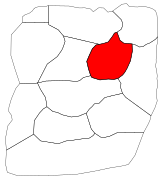 The Deldrimor Ruins is the remains of the old capital of the Deldrimor dwarves, the city portion of Thunderhead Keep. With the deaths or transformation over 200 years prior, its structures have eroded, leaving little more than rotten wood and the stone foundations. Unlike other dwarven structures, the Deldrimor Ruins has not been touched by the dredge, who commonly seek out to destroy all things related to their former Stone Summit slavers and their Deldrimor cousins.

Help the Priory with their excavations — (80)

Find shinies in the snow for Garff (80)

Help Tirabikkr look for the Light of Deldrimor (80)

Priory Explorer Hector: The Priory put me here to scout the area. Got findings, if you want them.

Assistant: In all the time I've been carrying you around, I've never seen you this... animated.
Rhoban: Your job isn't commentary. It's transportation. In respectful silence.
Assistant: Oh, is it? I feel my paw... slipping...
Rhoban: That's right, hurt a dwarf with no legs. Or arms. Or torso. Heartless charr.

Rhoban: These are the sacred artifacts of my people! Treat them with extreme respect!
Assistant: Shhhh. Of course they will.

Assistant: The skritt sure do...think highly of you, don't they?
Rhoban: There's no getting away from them. No matter how far I go, they always find me.
Assistant: Well, uh...it's nice to be wanted, I guess?
Rhoban: Oh? I encourage you to try it sometime! See how YOU like it!

Rhoban: The skritt once worshiped me as a god! They were horrible, but they knew who was in charge!
Assistant: Skritt are skritt. I wrote a monograph on them.

Merchant (1): Looks like a great place for a noodle shop.
Merchant (2): A soupcon of terror...a few bodies in the streets... But yeah, I see the curb appeal.