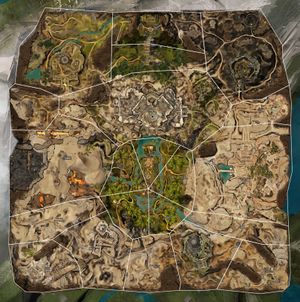 The Desert Borderlands are a collection of three Desert themed maps that surround the Eternal Battlegrounds in World versus World.

In the current rotation, only the Red Desert Borderlands are accessible (the Blue and Green maps use the Alpine themed borderlands). Players on the red team spawn at the Citadel towards the north of the map; players from the other two worlds spawn in either the south-east or south-west corners of the map.

Currently, one of the four World versus World maps will be a Desert Borderland, and it will always be the home borderland of the red team. The Green and Blue Desert Borderlands are inaccessible to players.

Like the ones found in Alpine Borderlands, capturing three of five monuments in the center of the map provides your world with a stack of Borderlands Bloodlust within the four Mist War maps.

The nine shrines are groups of 3 shrines that provide small advantages to players within the area of their respective keeps. When all 3 shrines tied to a keep are captured, players can travel faster between the 3 shrines by interacting with objects that will launch them in the air to the other shrines.

Players will earn a Blessing of Elements when they capture a shrine or interact with a captured shrine. While their world owns the corresponding keep, players gain effects depending on the number of shrines owned by the world. 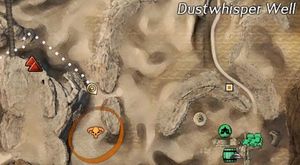 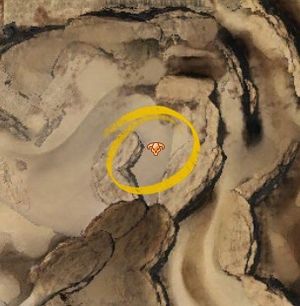 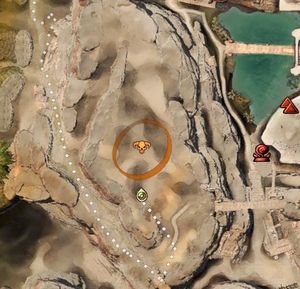