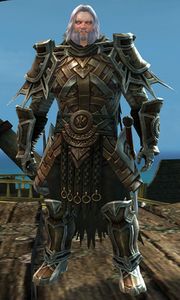 You may win the battle, dragon, but you will never defeat our spirit!

Forgal Kernsson is a warmaster of the Vigil. He is the mentor for characters who choose to join the Vigil as part of their personal story, and accompanies them throughout a large portion of their story.

Forgal is a stern old norn who, unlike some of his kin, embraces the military discipline of his order. He joined the Vigil after losing his wife and children to Icebrood. His father was the last shaman of Ox. Although at first dismissing the player character's status as a hero of their people and demanding their actions to speak for them instead of rumors, as the player proves their worth and moves up in the ranks of the Vigil, Forgal comes to respect his subordinate and eventual partner as the finest warmaster he has ever met.

Greets
What do you need?
Hello, there.
Greetings.
Do you have something to report?

Aggro
Time for some fun.

Disengaging
Anyone else?
Another point for me!

Upon being defeated
That could've gone better.