Captain of the Seraph

Captains of the Seraph are the highest ranking leaders of the Seraph. At any given time, the queen has from five to ten captains in the Seraph; each operates independently, but in coordination, under her command.

Each Seraph captain is granted authority over a certain territory of Kryta—be it the embattled foothills of High Timber Claim or the lowlands of Nebo Terrace. The troops under their command report upwards to them, and they receive their orders directly from the queen. In recent days, Queen Jennah has been absorbed in her duties to Ebonhawke and the treaty being negotiated with the charr. Most of the command of the Seraph in Kryta has fallen on her closest captain, Logan Thackeray, whose immediate authority covers the city and environs of Divinity's Reach. Now considered primus inter pares, he organizes the body of Seraph response to overall threats against the nation. 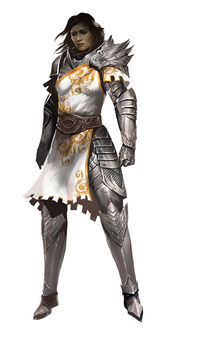