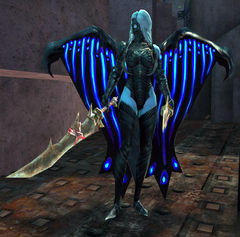 We serve our oaths, and those oaths demand your death.

Sayeh al' Rajihd is a female largos hunter from the Tethyos Houses. She met Trahearne some time in the past on the seas outside Orr, had to join forces to overcome unstated 'difficulties', and became indebted to him.[1] Trahearne later called upon that debt during the Pact's invasion on Orr by asking for her help to investigate the sunken temple of Abaddon and, later, secure the Artesian Waters. Sayeh also assisted in retrieving the krait orb for the Pact.

Sayeh served the Concordat of the Tethyos Houses dutifully as a skilled largos hunter. Some time in the past, she met with the sylvari firstborn Trahearne on the seas outside Orr. The pair had to join forces to overcome unstated 'difficulties', and Sayeh became indebted to Trahearne in the process. Sayeh considered it a private matter, and Trahearne agreed not to divulge any details of their mission to anyone else.[1]

As the Pact was forming and setting up Fort Trinity as their base of operations in the war against the Elder Dragon Zhaitan in 1325 AE, Sayeh traveled to Nonmoa Lake in Timberline Falls and let herself be captured to get closer to a krait slavemaster whom she considered worthy prey. Amused by the ordeal, she eventually slipped out of her cell and killed the slavemaster. When the imprisoned Warden Hywel asked Sayeh to help him, she said that it was up to him to free himself before she mentioned that she would be heading south to seek out worthier prey.[2]

If the Pact Commander chose to assist Crusader Apatia, the pair successfully rescued Hywel and other prisoners and learned about the deeds of the formidable largos and where she would be headed next. They decided to investigate the matter and tracked her down to the Treacherous Depths in Mount Maelstrom. Sayeh had been injuring local sharks to use them as bait to hunt something even larger, alerting the pair to her presence.

Upon encountering Apatia and the Commander, Sayeh told them to leave but eventually let them speak with her. The pair told her that they were aware of her earlier encounter with the krait and believed that she might have some information about the strange Blue Orb which the krait were using to ward off Zhaitan's corruption and which the Pact was interested in for their upcoming campaign against the Elder Dragon. When Sayeh showed no sign of interest, Apatia presented a challenge to her: the largos could test them for their skill in exchange for the intel. Amused, Sayeh accepted Apatia's terms and told the pair to hunt down her current target, the Chromatic Cubozoa.[3]

Once the pair had succeeded in the hunt, Sayeh honored their request and revealed that the blue orb was known to the deep dwellers as a thing of legend with mysterious origins. According to her, the orb might pose its own dangers but it would counter Zhaitan's influence somehow as it prevented the Elder Dragon magic from reanimating any nearby dead as the Risen. Sayeh also pointed out that the krait were keeping the orb in constant transit between their largest strongholds to maximize its effect, and she suggested that the pair use her tactic and let themselves be captured in order to reach the orb. After sharing her information, the hunter left the pair to plot their next course of action.

However, unbeknownst to the pair, Sayeh had become intrigued by their quest for the orb, so she shadowed them. She witnessed Apatia being captured by the krait and approached the Commander to tell them what had happened after the latter had secured the orb. She urged the Commander to leave the area before krait reinforcements arrived while she would help deliver the orb to Trahearne, who was now acting as the Pact Marshal.[4]

Greets
May your steps be relentless.

Aggro
Your respite will be brief.
I condemned your soul.
I've been waiting for you.