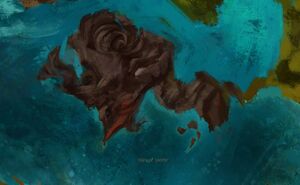 In-game map of the Isles of Janthir.

The Isles of Janthir are a group of islands in Janthir Bay, located north of Kryta and west of the Far Shiverpeaks. The isles are said to have once been inhabited by beings with the Gift of True Sight, though the name, culture, and appearance of this group is fully unknown. Durmand Priory scholars have been speculating whether the mursaat originated from the Isles of Janthir although they have found no conclusive evidence for their hypothesis.[1]

According to scholarly theories, the enigmatic inhabitants of the Isles of Janthir were associated with the Eye of Janthir although it is unknown if they were responsible for creating it.[1] The Eye served as a magical construct that could be used to see a person's gifts for magical aptitude.[2][3] It also possessed the power to defend itself, sustain the life of multiple beings and thus extend their lifespans as long as the construct itself remained active, as well as peer into the minds of its targets and use their weaknesses and regrets to break them down.[1]

Saul D'Alessio traveled to the Isles of Janthir to retrieve the Eye of Janthir. Since at least 1067 AE,[2] the White Mantle used the construct to identify "gifted" people whom they would sacrifice atop the Maguuma Bloodstone on behalf of their mursaat masters.[1] Ever since, the White Mantle often associated themselves with Janthir, though the extent of such relation was also unknown.

In 1329 AE, Rox mentioned that Minister Caudecus, who had revealed himself to be the Confessor of the White Mantle, appeared to have retreated to the Isles of Janthir with the Shining Blade agent Canach in pursuit. Caudecus's reasons for doing so remained unclear and if he had truly traveled to the isles instead of simply making his enemies believe he had done so.[4]

The World of Tyria
Retrieved from "https://wiki.guildwars2.com/index.php?title=Isles_of_Janthir&oldid=2607250"
Categories: