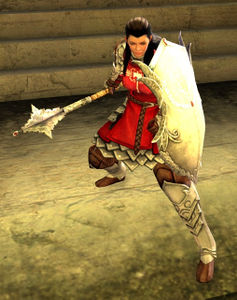 Let's just say that Commander Serentine and I don't see eye to eye on how our nation should be governed.

Commander Serentine was a recent Commander of Divinity's Reach.

Serentine was first noticed by Minister Caudecus as a lieutenant in the Ministry Guard when she began investigating Minister Brios's death. As she examined his body, lying dead in an alleyway in a poor area of Divinity's Reach. Noting the shattered glass, she found red wine spilt on the ground and shortly after, Captain Logan Thackeray demanded control of the crime scene, which Serentine disagreed with though she continued her investigation.

She managed to identify that the wine had been poisoned, though the reasons for Brios entering the alley remained unknown, and deduced that the poison had been supplied by smugglers. Wondering at the reasons of him entering the poor area without any guards, she pondered the idea that he had been engaged in treason. Shortly after, she rifled through his office for any evidence and found a slip of paper inviting him to afternoon tea with Master Exemplar Anise of the Shining Blade. She then interrogated Anise, though the Master Exemplar told her nothing of value.

To attempt to continue with her investigation, she spoke with Cadeucus, who instructed her to drop the investigation as he would help the late minister's family. Cadeucus then smiled, stating that Kryta would win through as ever if she just left things to him.[1]

In 1325 AE, it was discovered that the Ministry had an alliance with the bandits plaguing Kryta's countryside. The bandits would make the Seraph look incompetent, and in return, when the council took over Kryta the bandits would be able to do as they pleased. Furthermore, it became clear that Commander Serentine was disrupting the Seraph's investigations, and bailing the bandits out of prison early when they did get caught. Anise and Thackeray caught her trying to break Big Nose Ted out, and Serentine was killed in the ensuing scuffle.

Anomaly:
Serentine was changed from a champion to veteran in The Commander instance during the May 20th, 2014 update, however she remained a champion during earlier story instances.