Falcon Company... One of the most decorated units of the Seraph, wiped out by a centaur ambush.

The Falcon Company, also known as the Screaming Falcons, was one of the most famous companies in the Seraph. Most of the soldiers were killed in a centaur ambush. 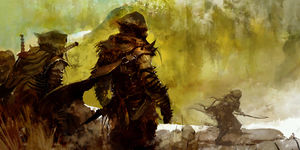 The Falcon Company (who were also known as the Screaming Falcons[1]) was one of the most famous contingents in the Seraph. Sometime prior to 1325 AE (but after 1316, as it happened after Queen Jennah took the throne[2]) Tervelan, the company's commander, received a letter from Minister Arton with orders that amounted to treason - to betray Falcon Company to the centaurs. On Minister Arton's part, so Tervelan believed, this betrayal was intended as a political move against Queen Jennah for focusing so much on Ebonhawke.[2] Tervelan could not care less about political maneuverings, but his command was suffering from neglect, and he hoped for political attention so he and his command would be given supplies, rations and munitions.

With this motivation, Tervelan went with associates of Minister Arton, to burn a centaur camp and kill the Modniir Ulgoth's family. Tervelan left evidence pointing to Falcon Company deliberately, to enrage the centaurs. After completing this mission, Tervelan sent a message, carried by a Screaming Falcon named Dansky, to Minister Arton detailing the success of the mission and, as requested, enclosing the Screaming Falcons' next patrol route. He concluded by demanding the promised payment.[3] Dansky, however, knew that Minister Arton never received that letter nor any others she had delivered. She thought that someone in his office must have received them. Tervelan also, presumably still on Arton's orders, had Sergeant Hal, one of the Falcons, leave messages in the woods, where they were picked up by centaurs from a nearby centaur camp.

Sergeant Hal did not know what the letters contained, but he figured out who they were for from the location he was asked to leave them. Hal transferred out of the company as soon as he could. While Dansky was recovering from an injury, Falcon Company was ambushed by centaurs, and all of its members presumed dead, despite the absence of several bodies. The centaurs, however, had taken them prisoner, including a soldier named Willem Harrinton, who wrote down everything he knew in a journal. The centaurs sold the prisoners as slaves to Goff's Bandits in Kessex Hills, but a few pages of Harrinton's journal were left in Queen's Forest.

Dansky, relieved to have survived the attack due to her prior injury, figured out that the letters she'd delivered had never gone near Minister Arton, and realized there was corruption deep in the Seraph. She left the Seraph as soon as she recovered, and joined the Lionguard instead. The Screaming Falcons were gone, but Tervelan got his wish; the rest of his command lived and were provided with supplies, and he was also promoted to the rank of Captain.

When Logan Thackeray, the first-among-equals Seraph Captain, discovered part of Harrinton's journal in 1325 AE, he contacted the Hero of Shaemoor for help. The hero, whose sister, Deborah, had been in the ambush, took to the task with relish and began investigating, starting with Tervelan. Tervelan, trying to cover his tracks, sent the hero into a trap, along with Sergeant Bigsby, who had been a friend to the Falcons and to Deborah, and whom Tervelan had taken a dislike to.

After discovering Tervelan's treachery in sending them alone to face a camp of centaurs, the Hero of Shaemoor and Sergeant Bigsby decided to head in anyway in search of more information. They defeated the centaurs and recovered the rest of Willem Harrinton's journal, which revealed that the Hero's sister was alive and that Tervelan was a traitor. The Hero took this information to Captain Thackeray, and the two went to Queen Jennah to warn her that she could be in danger. Minister Arton explained that, as Tervelan and his command was under his jurisdiction, this accusation was aimed at him. In a show of faith, he placed himself in Queen Jennah's hands to await further developments.

Logan sent the Hero to track down more information while he remained by the Queen to protect her from danger. The Hero's investigations led them to Sergeant Hal and the now-Lionguard Dansky, who gave the Hero enough information to track down Deborah and the other prisoners. The Hero called Logan, and the two located Deborah and several other prisoners at Earthlord's Gap in the Kessex Hills. They had to kill the bandits guarding them, but managed to interrogate one as he was dying. The bandit, defiant to the last, told the pair with his last breath that the bandits had been working for Minister Caudecus, but that they could never prove it.[4]

As the bandit's testimony was the only evidence against Caudecus, the Hero and Logan had to be content with rescuing the prisoners and informing the Queen of Minister Arton's innocence. Logan's determination to guard his queen was only reinforced by the knowledge of exactly who in the Ministry was trying to undermine the queen—and that they were willing to kill.

The Screaming Falcons had been considered disbanded since the ambush, and, despite recent developments, been mostly wiped out. The remaining members either were absorbed into other companies of the Seraph, or else joined other organizations altogether.