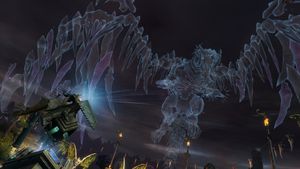 A holographic representation of the Shatterer.

Holograms are artificial, projected three-dimensional images of objects or creatures. Usually information repositories, some holograms are used for defense or attack purposes instead.

Gadd and Oola were among the first known asura to use technology to create holograms around 1078 AE. The technology spread with Zinn to Rata Novus where holograms were used to test the knowledge of students about the world on the surface until the city fell to the chak in 1173 AE. Some individuals, such as Maeva, Kudu, and Stumm, had utilized holograms since, for recording and relaying messages.

Despite these simple iterations, hologram technology was truly pioneered and expanded upon by Elli, an asuran expert in holomancy for the Snaff Prize in 1325 AE. When Elli was voted out as a semi-finalist in the competition, she began working as an announcer for golem fights and pit-fighting tournaments and used a hologram to amplify her size and voice. The technology gained the attention of Agent Zott who saw its potential for battle and introduced Elli to the Pact. Elli was able to create a viable holo-battleframe, and used it in the operation to sabotage Beacon Torch during the Pact's invasion of Orr in the war against the Elder Dragon Zhaitan.

In the 1326 AE Dragon Bash, holograms were used to decorate Lion's Arch and create dragon minions for partygoers to fight. The technology was stolen by Aetherblade pirates working for Scarlet Briar, however, and it was used to create a small army of hologrammatic pirates in the Aetherblade base in Twilight Arbor. During the Battle for Lion's Arch, Scarlet's Prime Hologram aboard the Breachmaker stood as the final obstacle between Lionguard forces and Scarlet herself.

In the present day, Moto uses patented solid holography technology in his Super Adventure Box, and the Inquest and other asura have begun to reiterate holograms for combat as well as long-distance communication, in addition to continuing the original use for for replaying prerecorded messages.