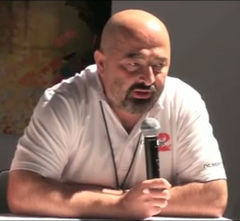 Daniel Dociu was the Chief Art Director for NCsoft North America and Studio Art Director for ArenaNet from 2003 until 2017, working on both Guild Wars 2 and the original Guild Wars. He was raised in Cluj, a big city in Transylvania, Romania. After graduating with Master in Industrial Design from the Academy of Fine Arts in Cluj, he moved to the United States in 1990 where he started working as a toy designer. After 2 years he decided to get into the games industry. From then on he has received numerous prestigious awards in the related field. According to The Making of Guild Wars 2 book, seeing his own art in motion, in a form of cinematic, is one of his proudest moments as an artist.