This article is about the term. For the NPC, see Boss (NPC). 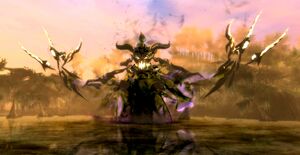 The Shadow Behemoth is one of the first enemies recognized as bosses.

Boss is an unofficial term referring to any foe that is a goal of a dynamic event, personal story mission or dungeon. All of those areas of gameplay can include multiple bosses as part of single event or mission, and especially in case of dungeons, which often have intermediate bosses of different ranks, which are used to distinguish among different levels of opponents, with many (but not all) bosses being Veteran, Champion or higher rank creatures.

Fighting against certain high ranking boss creatures in its "area" will cause the soundtrack to shift to "BossBattle" playlist.

Bosses which appear as final objectives during dynamic events can be veteran, champion, legendary, or even epic rank creatures. They're most notable for their ability to scale in difficulty according to the number of players participating in an event. Event bosses can scale up or down in various ways, gaining or losing additional: health, armor, abilities, skills, or damage. Some bosses may scale up to as many as a hundred players, but most only scale up to 10 players. Players must participate in these events to gain credit and receive rewards upon its completion. This can be achieved by dealing damage to the boss and enemies or objects that spawn as part of the event, or by interacting with non-destructible objects related to the event.

World Bosses are special event bosses encountered throughout the open world of Tyria that spawn a chest and award players with one bonus chest when defeated. Each individual world boss can only spawn a chest once per day, per character and award a bonus chest once per day, per account. Additionally, the chests spawned by world bosses contain varying quantities of Dragonite Ore, a crafting material that can be refined and used to make ascended weapons.

Bosses in dungeons don't scale – they are designed to provide a challenge for no less than five players, though many dungeon bosses can be tackled with fewer stronger and more skilled players should the need arise. All dungeons have boss battles, and while most are required to be defeated before the party can progress further into dungeon, some bosses are designed as optional encounters, while some can be avoided by other means even if they were originally designed to be part of the dungeon path being played. Notably, while fighting in dungeon, none of the party members will be able to use waypoints, which makes boss encounters in dungeons especially dangerous regardless of strength of the player characters (due to dynamic level adjustment).

Bosses in Raid encounters are designed for squads of up to ten players. While fighting a raid boss, defeated players cannot be revived until either the boss has been defeated or all players have been defeated. Many sigils (i.e. Sigil of Elemental Slaying and Sigil of the Night) and utilities (i.e. Powerful Potion of Outlaw Slaying) do not function during the encounter even if they are applied. All raid bosses require utmost coordination in order to succeed.