Decorations are cosmetic items which can be purchased or crafted, and placed in guild halls and its arena. Each can be placed, rotated, and removed to reposition the item. Many decorations have collision, allowing players to stack decorations and climb on top of each. Arena decorations cause combat effects, such as knockback or damage, to players.

Decorations for personalizing your guild hall.

Obstacles to customize your guild hall arena. Items in the Arena category can only be used as obstacles in the owning guild's arena. Spend items by talking to the Obstacle Coordinator in the arena. 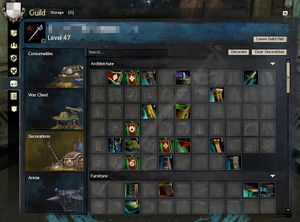 When decorations are crafted or purchased, each is immediately placed into the guild storage tab of the guild panel. Guild permissions are required to place, remove, or use decorations as a scribe: