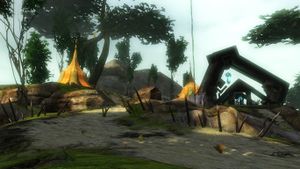 The Caromi are one of the tengu tribes living in the Dominion of Winds and are divided into many clans.[1] 250 years ago they were found in Kryta with their reach extending from Sanctum Cay to the countryside near modern day Shire of Beetletun. When the Elder Dragon Zhaitan awoke in 1219 AE in an event the tengu call the Great Tsunami, the tengu of the world saw it as a sign to return to Tyria.[2] A descendant of Talon Silverwing led the charge through Zhaitan's Risen forces a hundred years ago, and many tengu clans of Cantha, Elona and Tyria, including the Caromi, united forces to found a sanctuary at Sanctum Cay.[3] They established four great houses to govern their new home.

Presently the Caromi can be seen around the Dominion of Winds, guarding the Tengu Wall to prevent outsiders from entering tengu lands. Members of the tribe act as merchants in areas near the wall, selling their weapons to other races at the Hanto Trading Post and Ireko Tradecamp, and some have even ventured to the Vigil Keep to establish trade connections with weapon requisitioners. Many Caromi prefer wielding bows and use them expertly in combat.[1]