From Guild Wars 2 Wiki
< Mount
Jump to navigationJump to search

The following research was pioneered by Reddit user u/TheBandicoot to estimate the movement speed of mounts. Their full research posts can be found in the links below.

The goal of this research is to estimate the movement speed of mounts, under relevant conditions. In order to do so, the basic parameters for the calculation of speed need to be determined, i.e. distance, and time to travel across said distance. As certain mounts hypothetically perform differently on different terrain, e.g. Griffons move faster in flight than on land, due consideration and adjustments were made to accommodate this factor.

Distance, in general, is measured in in-game units. There are three proposed means of measuring distance, namely

Option 1 is sound, but unreliable until a track can be found that has an exact, rounded unit distance, where it is possible to use an exact number of ground-target skills at max range. Option 2 is likely the one with the highest confidence, assuming the coordinate readouts can be verified. Option 3, similarly, relies on the accuracy of past research on movement speed, which may be considered as highly reliable, at this point in the game's lifespan.

The method u/TheBandicoot opted for was Option 3, which will thus form the basis of the research.

Based on early research, the base, out-of-combat movement speed is 294 units/second (or "u/s"). However, to expedite on-foot testing, u/TheBandicoot chose to do so with permanent Swiftness boons. This can easily be factored in as a 33% increase, or 391.02 u/s. Bringing in their own research, they settled on 392 u/s as the baseline on-foot movement speed for the purpose of this test.

we can then surmise that

This then allows us to simplify variables to simply travel time, which can be measured with a stop watch. For increased accuracy, three travel times were taken for each mode, from which an average would be used in the above calculation.

Then again, the data will only be as good as the track it was gathered from. 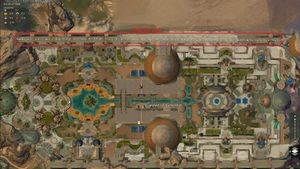 The ideal track to test land speeds would be an uninterrupted stretch of terrain with little to no incline, deviations, obstacles, or enemies to possibly hinder testing. A straight path is always preferable to a curved track to minimize errors. Having an obvious start and end points, such as landmarks or walls, will also help greatly in increasing accuracy of data collected.

For this purpose, u/TheBandicoot chose the north wall of the Garden of Seborhin in the Domain of Vabbi, as shown in the figure. 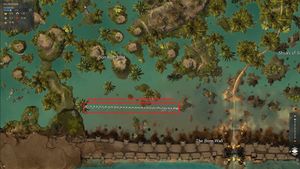 The changes in the May 8, 2018 game update confirmed that skimmer mount speed over water was indeed faster than on land. As such, an appropriate track needed to be found to measure the mount's speed as it floated over bodies of water. However, in order to measure the movement speed, as detailed above, the track still needed to be shallow enough to allow the player character to still run across, as if on land, rather than swim.

u/TheBandicoot identified a straight track suitable for testing just north of The Bone Wall in the southern regions of Elon Riverlands. 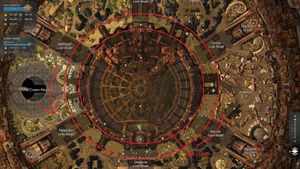 While scouting for a suitable location to test air speeds, the following criteria need to be taken into account. First and foremost, despite its purpose to test airborne speed, the track still needs to allow for on-foot movement, as that is a datum used for this research. To make things more complicated the land track ought to also be flat, and as similar to the air track as possible, to minimize errors. Secondly, to account for the speed increase of the Griffon as it levels after a swoop, with or without wing flaps, there needs to be a structure near the test site with sufficient height to allow for "full" swoops.

With these in mind, u/TheBandicoot chose to use the lower, inner ring of Divinity's Reach, with the griffon launch-off point being the "wall right to the east of Minister's waypoint." For those wondering, Leader of the Pact III does not stack with Swiftness, and the total movement speed bonus is still set at 33%.

In this particular case of the Warclaw, there was need to consider the effects of the second rank of the Warclaw Mastery that increased the mount's speed while in ally-controlled territory. Hence, the ideal track would not only take into consideration of the aforementioned land speed track selection criteria, but also be in an area that has the possibility of switching between ally-controlled and enemy-controlled. This is ideally near a Resource camp, as they are more likely to be contested than towers or keeps, and are just as easy to retake.

The location selected for testing was the northwest area of the Alpine Borderlands, near the northwest camp of either Foghaven or Stargrove.

The research data is as tabulated below.

All the above land tests were conducted on flat terrain. However, a common opinion states that the jackal outpaces the raptor while running up sloped surfaces. However there has yet to be verifiable evidence of such claims, let alone any determination on the range of inclines the statement holds true in, e.g. how steep would the slope have to be before the jackal is faster than the raptor? Conversely, the roller beetle is known to roll faster while moving down a slope [1], yet the same questions remain: does the steepness of the slope matter? Can it outpace any of the other mounts rolling downhill without its boost?

The mount mastery Bond of Vigor was not utilized in any of the above tests, and is hence unknown how much speed benefit can be gained in each mode. For example, using the skill allows the skimmer to continuously hover the entire duration, while still having a full bar of endurance after the effect ends. This in effect allows the mount to maintain its speed increase while hovering for longer, and will likely have significant impact on the above results. Similarly, with its much smaller endurance segments, could the jackal outpace the raptor while both are under the effects of the aforementioned skill? Further research into the speed benefits of this skill on different mount modes may be beneficial to players working to improve their mount race times, or just open world travel in general.

In a similar vein, there has yet to be conclusive research to determine if there is a speed cap on the roller beetle, and the mechanics of its Boost in general. This information may be helpful in determining the best moments to activate Bond of Vigor—e.g. before a boost, immediately after, or after a delay—such as to prevent inefficient use of the movement ability. The same research can also be applied to "endurance orbs" prevalent in mount races.