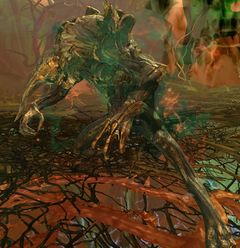 Smothering Shadows are small shadows spawned by the Shadow of the Dragon that resemble Mordrem Menders. They are immune to all damage unless buffed by Divine Fire, and are capable of cancelling out the effects of Divine Fire. They later appear within the Dream of Dreams during the fight against Mordremoth, with more varying appearances based after Mordrem Grunts and Mordrem Vinetenders in addition to before, but are no longer shadowy in appearance and can be damaged normally.

Section-stub. This key section of the article is incomplete. You can help the Guild Wars 2 Wiki by expanding it.
Reason: Missing skills
Retrieved from "https://wiki.guildwars2.com/index.php?title=Smothering_Shadow&oldid=1977115"
Categories: