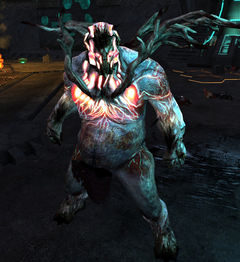 Nothing like outrunning a freak of science to get your blood pumping.

Subject Alpha is the main enemy and signature boss of the Crucible of Eternity's explorable mode. It is fought three times on each path and will use different skills depending on the path chosen by the party.

Subject Alpha was among the first test subjects in the Crucible of Eternity that Kudu, a high-ranking member of the Inquest looking for a way to create dragon minions of his own, experimented on. Alpha was subjected to corruption from multiple Elder Dragons and survived the process. The side effect of being cross-corrupted was that Alpha not only gained abilities of different dragons' minions but also the power to bend any dragon minion under its will. It was deemed a liability because of its resistance to being controlled, however, so the Inquest placed it in containment while the breakthroughs made in the research were used to create more refined and more controllable experiments such as Kudu's Monster.

Following Kudu's demise in a raid to the Crucible of Eternity in 1325 AE, a party consisting of Agent Spire, the Pact Commander and other adventurers ventured into the facility to seal it off for good and thus prevent further abuse of Kudu's research. During the excursion the party witnessed Subject Alpha breaking free and battled it. However, Alpha survived its defeat and returned to confront the party many times during their escape from the facility while commanding other captured dragon minions to do its bidding.

The final confrontation with Alpha ended in the party's favor, but one essence of the creature slipped away in the aftermath while all the other essences were destroyed. It remains unclear if the last of Alpha's essences managed to flee the Crucible of Eternity before the shutdown or if it was trapped within the facility.