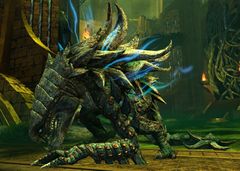 Mordrem Bonebreaker Alphas are large and extremely powerful Mordrem copies of Veteran Bonebreakers. They appear during Battle in Tarir during the Octovine event and cannot be damaged by normal attacks or conditions (such as Burning), but can be temporarily stunned by players using Enchanted Armor.

Section-stub. This key section of the article is incomplete. You can help the Guild Wars 2 Wiki by expanding it.
Reason: Missing skills
Retrieved from "https://wiki.guildwars2.com/index.php?title=Mordrem_Bonebreaker_Alpha&oldid=2150977"
Categories: