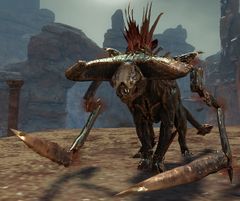 Veteran Mordrem Teragriff are Mordrem resembling horned colocals that come in two variations; one using ranged attacks and the other using melee attacks. Both types have two massive pincers attached to their backs, which are used to create explosive brambles or shield themselves as they charge down enemies.

1Number scales with the teragriff's level.
2They can make larger elevation changes than most ground-based projectiles; however, they still can't hit targets standing on terrain at significantly higher or lower elevations.