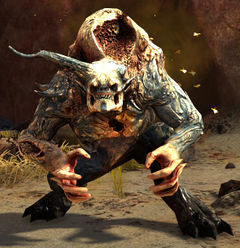 Champion Mordrem Troll Iron is one of the five champions of Mordremoth encountered in The Silverwastes. It can only be found in the cavern beneath Amber Sandfall that becomes accessible during The Breach.

For more information about the mobs encountered with this foe, see: Veteran Mordrem Troll
Abilities

1Stacks up to 10 times. If it's applied when the boss already has 10 stacks, it's removed and replaced by the Sticky effect.
2Permanent; prevents the accumulation of the Honey Glazed effect.