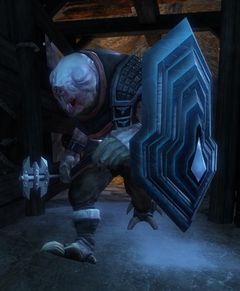 Champion Dredge Commissar is the leader of the Dredge forces in Dredgehaunt Cliffs that have been fighting with the Durmand Priory for territory. He is encountered in Tribulation Rift as the final objective of the meta event In Pursuit of Knowledge and must be defeated to complete the meta.

Inspiring comrades
They can't defeat us if we work together!
Comrades! Dig deeper. Work harder!
Once, we were slaves in the depths of the earth. Now we are free, and the world is ours!