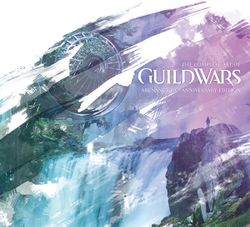 A glorious, oversized, full-color tome that includes art and commentary chronicling the ongoing development of the Guild Wars universe.

Explore the living history of Tyria through an expansive collection of never-before-seen concept art, production material, and creator commentary from Guild Wars and Guild Wars 2 that offers exclusive insight into an ever-changing world inhabited by millions of players! The continuing growth of the Guild Wars franchise is lovingly detailed by the ArenaNet artists themselves in a volume that commemorates the studio's 20th anniversary.

The Complete Art of Guild Wars: ArenaNet 20th Anniversary Edition is a 208 page artbook released in April 2020. The retail price is $39.99. The texts accompanying the images were written by Indigo Boock.