I feel trapped in this role...in this "legacy." I yearn for freedom, but I cannot turn away from these responsibilities.

Vlast, given the name Gleam by the bards,[1] is Glint's first scion, and Aurene's big brother. Wishing to be freed of the burden of his mother's legacy yet understanding the importance of his role, he continues to fight against the Elder Dragon Kralkatorrik's growing influence in the Crystal Desert no matter the cost.

Glint's first scion was born inside the city of Kesho in the Elon Riverlands.[2] He would later appear in Glint's Lair where he was attacked by Destroyers in 1078 AE and was defended by humans and the Brotherhood of the Dragon.[3] Some time after this, he returned to Kesho where he would be attended by Forgotten and, eventually, Exalted.

Bards called the first scion Gleam, although he chose the name Vlast for himself, which the people of the Crystal Desert eventually adopted.[1] In the following years stories about Vlast became legend, and Tyrians outside the desert who had heard bards tell legends of Gleam did not know if the scion was still alive or if he was even real and not just a fairytale.

In the decades that followed, Vlast was raised by Sadizi and other Exalted in the safety of Kesho. Due to them not knowing how to socialize him properly, he never bonded to the mortal races the same way as his mother had done.[2] Vlast grew more and more weary of the role Glint had placed on him but dutifully continued playing his part in her grand plan for the salvation of Tyria. However, he sometimes hoped to be freed of the burden of responsibility and roam free without worry.

After Kralkatorrik had slain Glint in a battle against Destiny's Edge in 1320 AE, Vlast began exterminating the Elder Dragon's Branded minions, which had begun appearing in greater numbers in the Crystal Desert, and keeping them contained in the Dragonbrand. His actions in the Desert Highlands made him a hero in the eyes of the locals, and his true name became known throughout the Crystal Desert and passed on to legend in the southern regions. The skirmishes with veteran Branded wounded Vlast, however, leaving behind slivers which would later be used as ammunition for makeshift weapons so travelers and locals could continue the fight against the Branded in honor of Vlast.[4][5]

Vlast sensed the birth of Aurene, Glint's second scion, in 1329 AE and shared an empathic link with her. He was both happy and reserved about her existence, welcoming a sibling into the world but also hoping that her closer bond with mortals would allow her to become more successful and less jaded than he was. At this time he became aware of the Pact Commander whom Aurene had chosen as her champion. 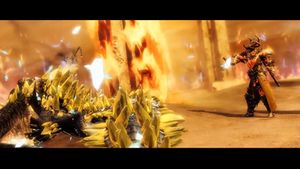 Balthazar arrived in the Desert Highlands in 1330 AE with the intention of hunting down and capturing Vlast and the Dragonsblood Spear which he hoped to fell Kralkatorrik with to gain the Elder Dragon's power. While the spear was safely hidden in Glint's Lair, Vlast fought against the invading Forged army in Salt Flats, protecting the locals and refusing to let the former God of War succeed in his plans which could threaten the existence of Tyria. The scion was eventually forced to flee to the Godfall Tower where he faced both Balthazar and the Herald of Balthazar in combat.

The Pact Commander arrived on the scene to witness the end of the battle and fought against the Herald while Vlast defended himself against Balthazar who successfully bound the scion with a spell. After defeating the Herald, the Commander came to Vlast's aid and challenged the God of War, only to turn out to be severely outmatched.

As Balthazar prepared to deliver the killing blow on the incapacitated Commander, Vlast managed to break free from the spell while the God of War was distracted and dove to take the hit instead, sacrificing himself to save the Commander's life. The scion crystallized and exploded into fragments, making Balthazar vanish and leaving behind memory crystals which scattered throughout the highlands and which the Commander would later access to learn more about Vlast's past and what he had hoped to accomplish.

The Commander later discovered recordings of Vlast while exploring Kesho, learning about the scion's frustrations and diligence to carry on his mother's legacy to the very end.

Lore discrepancy:
The Book of Vlast by Josso Essher states that "When the Branded came, [Vlast] was the first to throw himself into the fray. [...] The people of Elona told tales for generations, both of hope and of fear toward their 'protector.'" The suggestion that Branded had existed in the desert for multiple generations (with the average period of a generation being about twenty-thirty years), instead of only about a decade, conflicts with most of the known lore, including Guild Wars 2: Path of Fire—Road to the Desert which states that "1320 AE: An Elder Dragon Moves In. Kralkatorrik, the Crystal Elder Dragon, wakes from its slumber and heads directly for the desert region, leaving a corrupted swath of Branded landscape and creatures in its wake." while the Path of Fire story takes place in 1330 AE as per the story journal.