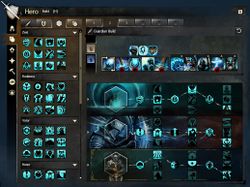 The trait interface of an elementalist. The grandmaster tier traits have not yet been unlocked.

Traits are passive abilities that can enhance a character's skills, provide bonuses to damage and attributes, and modify their actions. Each profession has 15 minor and 65 major traits grouped into five trait lines across three tiers. Like utility skills, only a small number of traits can be equipped at a time, determined by how the character allocates their trait points among the trait lines.

The trait interface is accessed through the Hero panel, in the Traits section of the Skills and Traits tab.

Every profession has five trait lines, each of which is linked to one primary and one secondary attribute. See the profession trait tables below for how each profession's lines and attributes are linked.

Within a trait line, traits are grouped into 3 tiers: Adept, Master, and Grandmaster. These tiers unlock sequentially as a character progresses and determine how many trait points can be spent in any trait line.

Characters acquire their first trait point at level 30 and earn 1 additional point every 6 levels up to level 66, when they start earning 2 points at a time. In total, a level 80 character will have 14 trait points.

The traits available to a character are determined by the allocation of trait points across the five trait lines. Trait points can be reallocated for free any time a character is not in combat or in a structured PvP match. The number of points in a trait line can be adjusted discretely using the plus/minus buttons at the left of the trait line's display, and all points can be deallocated by clicking the "Refund traits" button at the top of the panel.

For each point invested into a trait line:

Each trait line has access to 13 major traits, split across the three tiers. The first 6 (I–VI) major traits are in the Adept tier, the next 4 (VII–X) are in the Master tier, and the last 3 (XI–XIII) are in the Grandmaster tier.

These tables list the trait lines for each profession and the attributes linked to them.