This article is about the lore. For the PvP backpiece, see The Ascension.
Stub. Key elements of this lore article are incomplete. You can help the Guild Wars 2 Wiki by expanding it.
Reason: Missing info from GW1, LWS2 and tons of information from PoF 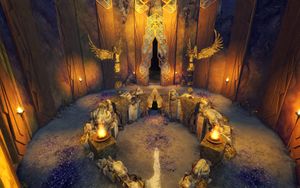 Hall of Ascension in Augury Rock.

Ascension is a communion with the six gods sought by many heroes.[1] Ascending constituted of three trials and a final test within the Ascension chamber of Augury Rock. The deed of Ascension has not been attained in generations.[2][3]

Sometime before the Exodus, the Margonites attempted to Ascend under their leader, King Khimaar. Misunderstanding the nature of Ascension, they attempted to build colossal pillars to reach the Six, as did many others. Even many hundreds of years later, these towers stuck out of the ground of the Crystal Desert.[4]

During the reign of Turai Ossa, Ritual Priests Hehmnut, Kahdat and Nahtem cared for the shards of a vision crystal necessary for the trial in Elona Reach. However, mistrusting each other, they kept the shards of the vision crystal in separate camps, causing their colony to crumble due to this strife along with the battles with the Forgotten who they had attacked.[5]

In 272 AE, the dragon prophet Glint compiled the Flameseeker Prophecies that foretold a group of Chosen would rise and gain Ascension in the Crystal Desert. Many great human civilizations have traveled to the Crystal Desert to Ascend, seeking the guidance of the gods or believing that the prophesied few were among them, and almost all have failed.

On the advice of Vizier Khilbron, a group of Ascalonians and Shining Blade in 1072 AE were to travel to the Crystal Desert and Ascend to unlock the Gift of True Sight which would allow them to face the Mursaat. In the desert they encountered the Ghostly Hero—the spirit of Turai Ossa, still determined to reach the Hall of Heroes. Under his guidance, the heroes retraced the steps of the Elonians, seizing the Throne of Pellentia, cleansing their spirits at the Rune Circle, and reassembled the Vision Crystal.

The Pact Commander relived the Trials of Ascension.

Around 1330 AE, a group consisting of various races from all across Tyria and Elona had travelled to the Crystal Desert in search of ascending, calling themselves the Followers of Ascension. The group initally consisted of Kaidenna, their sylvari leader with a Wyld Hunt to discover the secrets of Ascension and the Forgotten, Xunn, Nyala and Dawnwynn with whom they had created the main camp for other followers. Kaidenna’s plan to reach Ascension was to activate the ancient teleporter to the Ascension room and there defeat the now-Branded Josso Essher, the guardian and protector of the place who used to test heroes during the Thirsty River Ascension trial.

While traveling around the area assisting the Followers, Kaidenna began to enact her plan to access Augury Rock, protected by Josso Essher with a shield of Branded energy. Aided by the Commander and adventurers, she retrieved Forgotten magic from the corpse of a Branded Forgotten priest in an attempt to activate the teleporters to within Augury Rock. The group successfully activated the teleporter and faced off against Josso Essher. Despite him utilizing Branded earth elementals and summoning doppelgangers, he was slain. The catacombs beneath the Hall of Ascension soon opened up, granting access to several ghosts and additional information on Ascension.

Some time after, the Hall of Ascension was resealed, causing three of Turai's soldiers to appear and unbound magic to begin flowing out into the region. Attempting to stabilize the unbound magic, Kaidenna and her allies eventually caused the doppelganger which manifested as part of the Ascension trials to appear. Taking on the form of an ally of Kaidenna, it attacked the real form of the one it mimicked until it was slain.

The first rite of Ascension was the Thirsty River trial, where heroes would attempt to kill six Forgotten priests, guarded by enchanted armors, constructs built by Forgotten, alongside Forgotten themselves. The Forgotten guarding the priests were Goss Aleessh, Hessper Sasso, Issah Sshay and Josso Essher, with the enchanted armors Custodians Hulgar and Phebus guarding two priests.

After the rites are completed, the one seeking Ascension will need to battle a doppelganger that will take the form of that creature, mimicking their appearance and abilities.