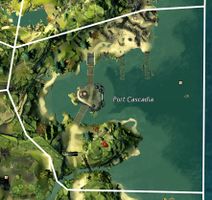 Port Cascadia is an area within Drizzlewood Coast. Once captured from the Dominion by the United Legions, it provides various services to allied combatants.

Icons when controlled by Dominion (red) and United Legions (blue)

Defend the United Legions siege engineer as he repairs artillery (80)

Destroy Dominion bombers before they complete their runs (80)

Escort the supply caravan to the lighthouse (80)

Escort the supply caravan to the port (80)

Squash skirmishes around the area to maintain troop morale (80)

Iron Legion Marksman: We lost another one today. She was young, too. Couldn't have been out of the fahrar long.
Ash Legion Spy: Cubs killing cubs. Is this what we've come to?

Section-stub. This key section of the article is incomplete. You can help the Guild Wars 2 Wiki by expanding it.
Reason: Add related achievements.