A Fungus Among Us

A Fungus Among Us 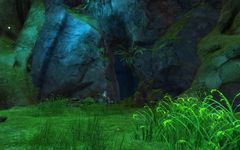 Use mushroom skills to reach checkpoints.

A Fungus Among Us is an adventure in Griffonfall. Upon beginning the adventure, you will be transformed into a fungus with two skills that allow additional movement options and must navigate through all the checkpoints to complete the adventure.

Head west from Southwatch Creep towards Griffonfall. As you pass under the adventure icon on map, head south to the base of the tree root, turn back north and climb up the tree trunk using the fungus pads.

Players will be transformed into mushrooms and have 2 minutes and 30 seconds to race through 8 checkpoints. The course utilizes a combination of jumping and the mushroom abilities to succeed. The first ability, Shroom Jukes, hops forward twice while evading then performs a longer leap. The second ability Cap Hop hops forward a short distance and lands on your head, then can be activated a second time to launch you up to 1200 units (if using auto-run, you will need to cancel this before using Cap Hop, as autorun interrupts the second skill).

The next checkpoint appears on your mini-map after you activate the previous one, turning it green. The course runs first north then counterclockwise.

The adventure will end if either the timer is up, if the player is killed or upon reaching the end.

Blazing Speed Mushrooms (Itzel Lore Level 3) — Speed Boost Mushrooms are located on the course for a speed boost. Gaining this effect also removes and prevents reapplication of the