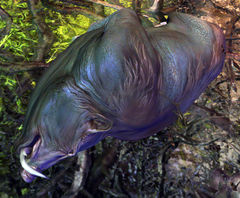 The Toxin-Cured Hog is an object found in a cave west of Westwatch Patch. If Westwatch has not yet been powered up, then vines will block the path towards the cave from the south. It is however possible to drop down into the cave from the north - players can either glide south from the

Wanderer's Waypoint — , or walk northeast from Westwatch and circle back westwards, before dropping in above the hog. Interaction with the hog will replace all the character's skills and take away any passive effects.

The toxic cloud preserved the meat on this hog. It isn't spoiled, but could it be edible?

Take a piece of toxic bacon.

The toxic cloud preserved the meat on this hog. It isn't spoiled, but could it be edible?

Eating the Bacon causes the player to lose health over time at a rate of 5% max health per second. The challenge is considered successful if the player can survive for 60 seconds without reaching 0 health.

The key to success is self-healing through Keep It Down (see skills, below). It is possible to complete this challenge using Keep It Down alone. Using it immediately after the fifth damage pulse, and then every time it's off cooldown, will succeed.

Any of the following techniques can be used to complete the challenge more easily:

Taking a piece of toxic bacon replaces your skillbar with the following skills: