No Mask Left Behind 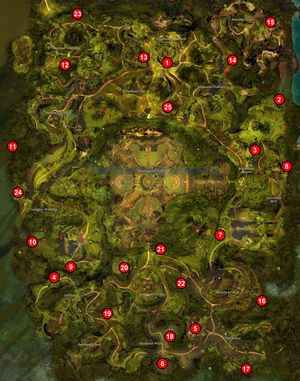 No Mask Left Behind is an achievement in Auric Basin that involves finding the masks belonging to fallen Exalted.

Northwatch Waypoint — loading… and head north, towards the exalted outpost. The mask is at an underground level just below the outpost, where the event Collect sediment from the fallen Exalted for Arcanist Mariette takes place.

Eastwatch Waypoint — loading…, head north towards the forked road. There are some mushrooms to climb near the left entrance; after climbing them, make your way through the Quetzal village, passing the Notice to Trespassers. Continue north towards the tents, passing them, until you reach the end of the large plateau, there will be one more plateau beneath it. Jump down on it and then safely glide downwards towards the Exalted Mask, lying on the platform below, overlooking the area where the Mordrem Vinetooth is fought.

Eastwatch Waypoint — loading…, head north towards the forked road. There are some mushrooms to climb near the left entrance; after climbing them, make a left U-turn and climb up some more mushrooms. The Exalted Mask is around the corner situated right above the Eastwatch pylon.

Southwatch Waypoint — loading…, head southwest to the "A Fungus Among Us" icon (icon is slightly overlapping the "fall" of Griffonfall) - you'll be under it. Continue going westward slightly and make a 3/4 circle wrapping around to the south and then back north at the base of the tree you can see south of the icon and go up the tree trunk via the mushroom stairs past the NPC for "A Fungus Among Us." Follow the trail north and then west. The Exalted Mask is right by the water/waterfall.

Chak Hollow Waypoint — loading…, head west to the "razed Nuhoch village" which is inside some very large, hollowed out tree trunks. The mask is up on a ledge, inside, with a Mordrem Guard Sniper guarding the mask. It's easy to reach with a skyscale or just run up the scaffolding along the outside to get to the ledge.

Chak Hollow Waypoint — loading… and follow the SW path that leads to Morwood Wilds. There are two vine gates that block entrance to Morwood Wilds and the location of the mask. It can only be reached after the event

Escort Exalted Sage Manssir to Morwood Wilds (80) has been completed (if you try to glide into it while it's closed, you will be automatically teleported outside). The mask is next to the pylon.

Directly east of the

Southwatch Waypoint — loading… follow the route on the west. At the first full intersection where you can turn right (north). Head north, after getting out of the tunnel, head left and climb the mushrooms.

From mask 9 continue west on the ground floor. On the map you be heading towards the mastery point. Under the mastery icon there is a cave. Enter the cave. In the cave you see a a few priory researchers with a broken down golem. Enter the cave to the right. Go all the way up and you will walk right into the mask.

In the cave where the event with Auran the Golden Ooze occurs, where an exalted pylon for Westwatch is located. On a ledge near a Speed Boost Mushroom on the east side of the cave, high up.

Wanderer's Waypoint — loading… toward the Nuhoch Wallows north of New Skrittington. Drop down one level underneath the large tree with all the Coztic Itzel. The Exalted Mask is near a torch right in the middle of the tree one level down. You can use an alternative path from the

Wanderer's Waypoint — loading…, use the bouncing mushroom to reach the exalted portals, and then glide east towards the mask, which is on a ledge halfway up a tree (due northwest of the waypoint). Alternatively if you have a mount you can easily reach it from the

Northwatch Waypoint — loading… head east to the Maguuma Shallows. The mask is on a ledge that lies behind the Northwatch Pylon and the waterfalls. A Veteran Quetzal Scout guards the ledge. If you have a Skyscale, just fly to the ledge, otherwise, you can get to the ledge by climbing the mushrooms and the root to the ledges by the waterfall and then gliding down to the ledge where the mask is.

Northwatch Waypoint — loading…, head east and cross the ravine with Ley Line Gliding. Head south when you emerge in the frog area, and follow the tunnel as it twists back around to the north. The mask is on the edge of the river.

If you don't yet have ley line gliding you can also reach Burnisher quarry using the Nuhoch Wallow due northwest of the Westwatch vista.

Southwatch Waypoint — loading… take the path eastwards towards the pylon in Mossheart Walk. The mask is within a small cave directly southeast of the pylon. If you have a Skyscale you can fly directly to the cave. Otherwise, jump onto the rock pillar opposite the cave and then glide to the cave.

Almost directly southeast of the

Chak Hollow Waypoint — loading…. Ledge is on the south side of the road, accessible by foot, Springer or Bouncing Mushroom.

Chak Hollow Waypoint — loading… head west along the path towards Morwood Wilds. A vine gate blocks the passage into Morwood Wilds until after the event

Escort Exalted Sage Manssir to Morwood Wilds (80) has been completed. It is possible to glide into the area while it is closed, for example climb the dead tree at Jawatl Grounds. After the vine gate, keep heading west to the next vine gate that blocks passage to the pylon and then head north towards the Blighted Sapling Feeder which will be on your right. Hop up the mushrooms and across the vine to a ledge where the mask is located.

Slightly west of the

Overseer's Cave — loading… on the map, but above ground, with a view towards Balthazar's Rest

Southwatch Waypoint — loading… follow the path southwest and then take the Bouncing Mushroom on your right up to the ledge. Head east and you will see the mask.

Endurance Crash Site — loading…. The mask is on a ledge about midway between these two points, and slightly south of the line between them.

Wanderer's Waypoint — loading… head east to Scholar Jinora. Jump off the ledge and glide northeast to the bottom where the mask sits in a grove of mushrooms.

Westwatch Waypoint — loading… head south to the Lastgear Standing area. The mask is located in a clearing up on a ledge and is guarded by several Smokescale. With a Skyscale you can easily get to this location. Otherwise, the guide for the Ancient Golem Part hero challenge location will get you to the spot where the mask is located. Instead of entering the cave to the south to get to the hero challenge, head north to the mask.

Northwatch Waypoint — loading… and head south, towards the Suspicious Orichalcum hero challenge. Keep going south until you reach a tree with protruding mushrooms. Start climbing them, and you will eventually reach a small plateau with the Exalted Mask.