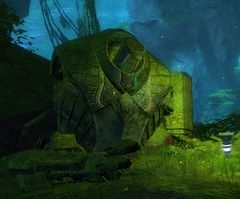 An Ancient Golem Part rests high in the cliffs of Auric Basin awaiting unwary explorers. Interaction with the part triggers the group event: Defeat the ancient golem recovery squad. This event spawns at least three golems that must be killed within 10 minutes for the hero points.

Start at the path above Fahautl Grounds and head northeast until you hit a wall with three Bouncing Mushrooms. Take these up and then flee or fight your way past the Veteran Quetzal Scouts. A ley-line energy flow leads from a western ledge towards the tunnel entrance to the hero challenge - any of the methods listed below will allow you to cross to the other side. In front of the tunnel entrance are a couple of Veteran Smokescales. Within the tunnel itself are dormant Veteran Ancient Sentry Golems which will activate and become hostile upon your approach. Stealth gliding can be used here to avoid the sentry golems.

If you have Ley Line Gliding, simply ride the ley-line energy flow to the ledge.

Alternatively, for a shorter glide, go to where the ley-line energy flow is, glide leaning forward to land just under the platform the ley-line energy flow leads. To the right (northwest) side there is a lowered branch resting against the cliffside, glide to it. Because it sits against the cliff, you cannot fly over it and miss. Once landed, climb the branch and cliff with a short series of jumps.

Wanderer's Waypoint — in Tarnished Treetop, head south across the bridge, past the Veteran Itzel until you reach a tree-trunk on the edge of the area, looking down towards Westwatch Patch. Jump off the edge and glide south, aiming directly for the platform with the Veteran Smokescales on the path down to the golem area.

It still hums with power. There's a red button on the side.